An installation in my solo show the „Meta“ im Kunsthaus Braunschweig. Here’s also a video with an interview with the local press.

„Reality-Glasses“ is a 5:05 minute essayistic short film about how humans created their own realities ever since. It can be viewed only on a specially constructed headset made of cardboard and acrylic lacquer with hardware components. END_OF_DOCUMENT_TOKEN_TO_BE_REPLACED

In this interactive video installation up to 4 recipients are confronted with a virtual recreation of themselves out of objects and stuff. In a way they are becoming interactive ready-mades. The masks on the figures in the virtual mirror recite an acoustic collage of text fragments from the essay ’The Imaginary‘. It’s an early book by Jean-Paul Sartre which is a phenomenological study of human imagination. In it, Sartre distinguishes between perception and imagination which he identifies as humans ability for creating reality.

The work also has an immersive level. The viewers which are re-embodied out of objects and things, can move around and collect virtual coins that appear out of thin air in the virtual space. They even have to do it to sustain themselves, otherwise someone else wins and rest will disintegrate. This Win-Loose-Loop continues endlessly. The recipients could listen to the speakers, but the temptation to get lost in the spectacle is enormous. Also the exhibition environment is reconstructed in 3D to condense the experience of a reflection in this site-specific installation.

This project is a cooperation Jens Isensee and Rico Possienka. The installation is made with Kinect Sensor and Unity 3D and an ultra short distance projector connected to PC rendering hardware. 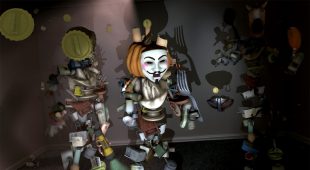 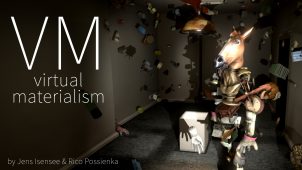 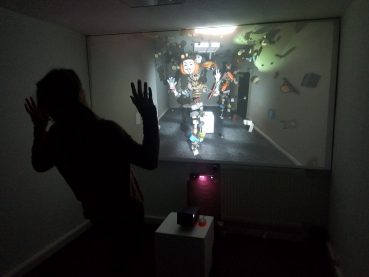 END_OF_DOCUMENT_TOKEN_TO_BE_REPLACED

The Wheelwork is a 4-channel video installation made of cardboard with integrated LCD-screens. Through four apertures in this sculpture its simulated inner workings can be seen, a mechanism made of wooden gears that was filmed in the historic mill ensemble of Heiligenrode.

END_OF_DOCUMENT_TOKEN_TO_BE_REPLACED

Overgrowth is an interactive spacial video installation with integrated motion sensor, PC hardware and a short distance projector. The sensor of this interactive installation detects the viewing angle of a spectator in front of the projection and the 3dimensional scenario is generated and displayed according to the recipients perspective. The viewers hand movements are captured as well and transferred into the virtual space. As light spots they float over the scenario and organic structures are sprouting at the corresponding places on projected wall.

The spectators interactions generate an organic structure which is growing excessively until its complexity reaches the systems rendering limits and the players interactions are shrinking structures again. The result is a vital and diverse play of prosperity and transgression in a closed, self-regulating sphere. The spectator is thus emancipated from his passive role to become the designer of an individual sculpture. After leaving space, the generative structure resets itself, making the sculpture temporary and processual. END_OF_DOCUMENT_TOKEN_TO_BE_REPLACED

This Installation detects movements and its extremities begin to deform in opposing rotations. The spectator becomes part of the process. END_OF_DOCUMENT_TOKEN_TO_BE_REPLACED

The ego tunnel is an autonomous computer installation. An old PC system was dismantled and all components rebuilt into a new constellation. This newly configured system is only able to observe itself (through a webcam) and reproduce the image of itself in endless repetition. In this sense it is redundant and self-contained as though the system is similarly running a film of itself. This might vaguely be reminiscent of Thomas Metzinger, a philosopher involved in neuroscience who, in his book ‘The Ego Tunnel’ describes the human ‘Self’ as a self-illusion vigorously practised by human beings.

END_OF_DOCUMENT_TOKEN_TO_BE_REPLACED 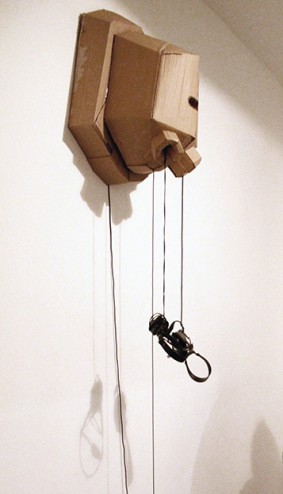 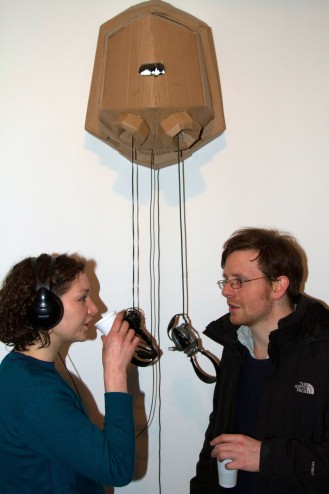